Pink salmon, also known as humpback salmon are a migratory species of salmon, which are native to river systems in the northern Pacific Ocean and regions of the Bering Sea and Arctic Ocean.

A stocking programme using Pink salmon was undertaken in the northwest of Russia in the second half of the 20th century. They have now established self-sustaining populations in rivers in northern Norway and in the far northwest of Russia.

It is thought that the Pink salmon being caught in Scotland and Ireland have ‘strayed’ from the populations in northern Norway or Russia.

Pink salmon can be distinguished by the following: 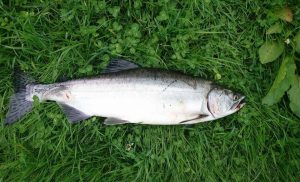 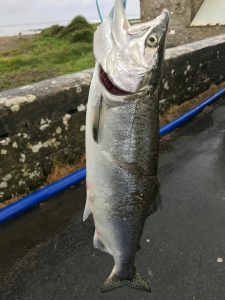 Pink Salmon spawn at a different time from our native Atlantic salmon, have a 2-year lifecycle and generally spawn in summer. Often in main river channels, in the lower reaches of rivers, and sometimes in upstream tributaries.

Fisheries Management Scotland said: “Whilst it is theoretically possible that these non-native species could establish themselves in Scottish rivers, the higher water temperatures make this unlikely.”

AST Research Director Prof Ken Whelan said: “All anglers should be on alert for dead or dying pink kelts from now until October. It would be a good idea to take photographs and exact co-ordinates  using their smart phones.”

Management organisations in both Ireland and Scotland have concerns, although the risk to native Atlantic salmon are not yet fully known.

Please use the links below for more information and guidance: