Coastal Waters provide the transition environment for both salmon and sea trout when they leave fresh water as smolts, and again, later in their lives, when they return to spawn. But the two species use the coast in different ways; whereas salmon tend to head directly out to sea to follow migratory routes to feeding areas in the ocean, to which they are genetically ‘programmed’ to go, sea trout tend to stay in the littoral zone to feed, sometimes returning to fresh water or the brackish water of an estuary. Some sea trout, like salmon, travel great distances to reach their preferred feeding grounds, as is the case with sea trout populations from some English & Scottish east coast rivers, while other groups remain close to the freshwater catchments from which they emerged as smolts. 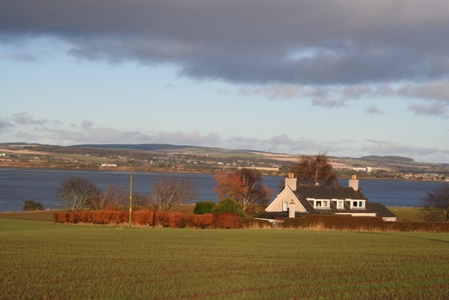 Montrose Basin (right), a unique tidal lagoon through which the River South Esk flows, and which provides exceptionally rich coastal habitat for a wide range of species of mammal, bird and fish, especially sea trout and salmon. The Basin is a RAMSAR (click) site for protection of its astonishingly rich and diverse wildfowl populations. An aspect of this extraordinary geographical feature, which dries out extensively at low tide, is that it may provide feeding for sea trout from other east coast rivers.

When developing AST’s ‘Three Pillars’ strategy it quickly became apparent that human activities can pose threats to coastal migratory routes of wild Atlantic salmon and sea trout. These threats may be a significant factor in the marine survival of both species. There is concern among wildlife conservation groups that aquatic species of mammal, as well as non-salmonid migratory fish species, may also be affected by obstructions and pollution in the littoral zone. 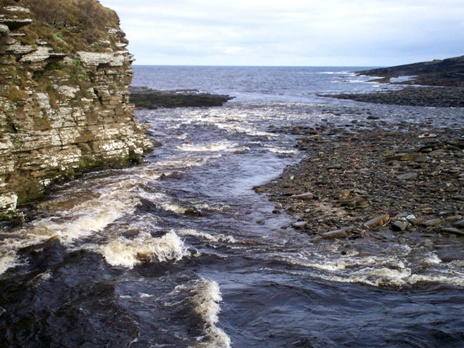 The estuary of the River Forss in Caithness into the Pentland Firth is a sudden transition for the outgoing smolt from the relative security of the little river to the turbulence and salt water of the storm-battered north coast of Scotland. For salmon and sea trout smolts, perhaps as small as 12cms, this transition involves the process known as osmoregulation, which is a physiological change in the fish to allow it to retain water and dispose of excess salt in the saltwater environment of the sea.

Human activities impact more directly on coastal waters than they do in the deep ocean. Underpinning our concerns about changes in the coastal zone, and consequent threats to marine survival of migratory salmonids, are the effects of climate change. Warmer seas, extreme events such as storms, drought, flooding and its associated pollution, increased predation from species colonising the warmer marine habitat, and changes to the marine food web, are some of the impacts of climate change, and there are of course others.

This 5lbs sea trout was caught (& returned) in the sea by an angler fishing from the shore in Orkney. Such sea trout spend nearly all their lives in the coastal zone, and often access very small streams to spawn, and return to the sea almost immediately afterwards. Sea trout were described in a book by Dr Edward Fahy as ‘child of the tides’ because of the way they use tidal habitats, in harmony with the ebb and flow of the tide. Because sea trout live in the intertidal margins of coast and sea they are vulnerable to many of the human activities that take place there. Salmon farming, energy generation and transmission, coastal pollution, mixed stocks coastal netting, illegal netting, recreational fishing and other forms of exploitation all pose threats to sea trout survival.

Human activities in the coastal zone may already cause disruption to migrations of salmon and sea trout and include: 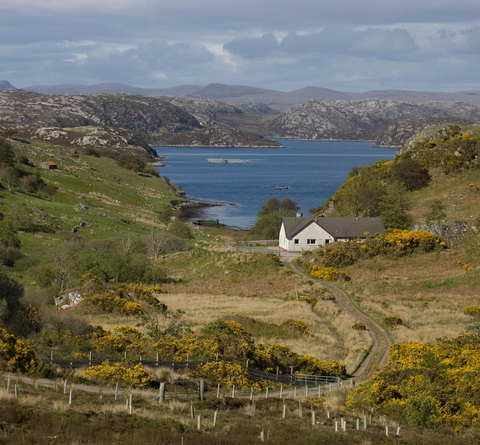 A salmon farm in the sea off the Scottish west coast. The large amount of biomass, represented by thousands of farmed salmon in such open mesh cages attracts parasites and predators in numbers that are unnatural. Pollution caused by their excrement and chemicals used to prevent disease stays in the vicinity and collects in large amounts of raw sewage on the bed of the sea close to the cages, especially in ‘low energy’ cul-de-sac sea lochs, where there are minimal tidal flows.

Salmon farming in open mesh cages floating on the surface of the sea in inshore waters is controversial but lucrative and makes a considerable contribution to the Scottish economy and to local employment. 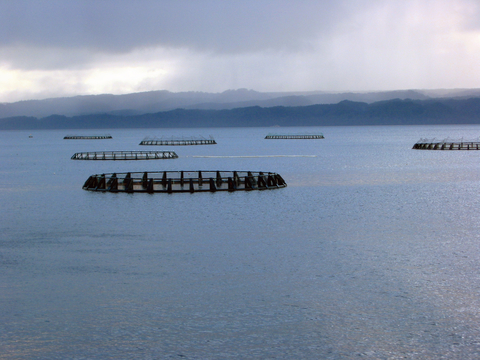 The photo above shows floating, open-mesh salmon farming units in the Bay of Fundy in New Brunswick, Canada. The effects of the huge biomass of salmon in these cages has changed the Bay’s ecology profoundly, especially numbers of wild salmon using the Bay to access its numerous rivers and streams

There is no doubt that severe damage has already been done to wild sea trout stocks on the Scottish west coast and in the islands. The main culprit is certainly the sea louse (Lepeoptheirus salmonis) which in their larval state (nauplii becoming copepodids) swim in large clouds called epizootics. A post-smolt swimming through one of these ‘clouds’ of larvae is inevitably infected, sometimes with dozens of sea lice larvae. They attach themselves to wild sea trout or salmon post-smolts (length c.12-15cms) in a parasitic relationship which is often lethal to the fish. The coincidence of an epizootic with an outgoing cohort of Atlantic salmon smolts is an occasional hazard. But the likelihood of infection of sea trout post-smolts is much higher because sea trout stay close to the shore and feed in the inshore tidal margins where epizootics containing juvenile sea lice in huge numbers await a salmonid host. 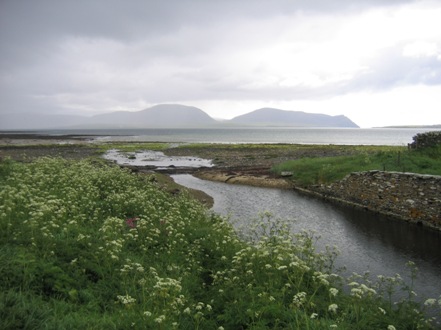 Typical coastal habitat at Scapa Flow, where sea trout feed close to the shore in the inter-tidal zone with easy access to spawning burns like the one shown in this photo. This is excellent sea trout habitat, where these mysterious animals can move into fresh water or salt water with each tide making the whole intertidal environment their own.