The vast area of the North Atlantic Ocean is the home of the Atlantic Salmon. It is where there is (or should be) an abundance of food to enable smolts leaving their rivers of birth to grow to become large predatory pelagic fish. A fully grown salmon that has fed well in the ocean may weigh more than thirty kilograms and is one of a small number of fish species at the top of the pelagic food chain.

There are many variables affecting pelagic zone habitats inhabited by Atlantic salmon. For example, sea temperatures vary considerably within the water column, and in different areas of the ocean. It is not simply that the further south you go the warmer the water, although generally that is true. Ocean currents bringing fresh water from melting arctic ice in a southerly direction meet northerly movements, such as the North Atlantic Drift, but are usually separated into layers because of the different densities of fresh and salt water. Powerful weather systems churn up the surface layers and drive unpredictable surface currents, which have a strong influence on planktonic organisms and the fish that feed on them. Underpinning climate change and weather events are geophysical cycles, such as the North Atlantic Oscillation (NAO) which have profound effects on temperature and consequently on the abundance or otherwise of prey species on which Atlantic salmon depend. 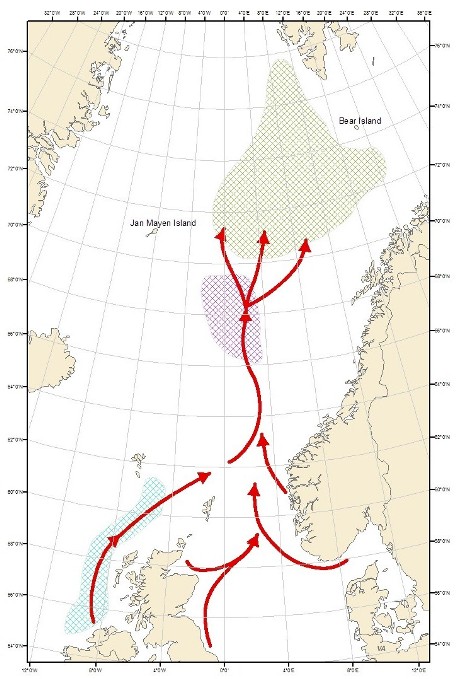 The Salsea-Merge project, which ended in 2011, plotted the migratory routes of wild Atlantic salmon post-smolts after leaving their rivers of birth. This map shows the main migrations of UK, Irish and Norwegian salmon as they head north towards the arctic circle. Unfortunately, in recent years this region of the Atlantic Ocean has offered salmon unreliable levels of prey species abundance with the result that many grilse and salmon have arrived back in their native rivers in poor condition.

Salmon colonised rivers revealed by the retreating ice as the last ice age ended. Presumably, as the climate warmed, rivers further south, which had been used by salmon, became unsuitable as a result of higher water temperatures. That pre-historical process provides a paradigm for changes to freshwater habitats taking place in the context of current climate change. Frozen rivers opened up to permit salmon to breed in them, and other rivers become too hot for salmon to survive in them.

The defining aspect of this process is that salmon use river catchments as part of their life strategy. Laying eggs and juvenile development take place in fresh water, where threats to the survival of fish less than 15cms in length, mainly from predation, are less than in the sea. Colonising ‘new’ rivers from the ocean, where the adult salmon is a top pelagic predator, demonstrates that the Atlantic salmon is during its marine phase a species of sea fish competing with and predating on other pelagic species, such as herring, mackerel and blue whiting. 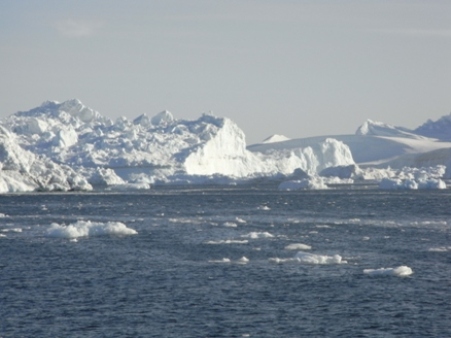 This photo shows icebergs off the West coast of Greenland, where many European multi sea-winter salmon feed for two or three years before returning to their rivers of origin to spawn. The western part of the Atlantic Ocean, of which the Labrador Sea is part, currently provides high quality feeding for Atlantic salmon from North America and Europe, as well as for other species of pelagic fish. High concentrations of capelin and squid enable salmon to grow quickly. When these fish arrive back in their European rivers they are usually in excellent condition. Salmon that feed in this area tend to be early running or spring fish, which are the most highly valued of all groups of Atlantic salmon returning to our rivers.

The oceanic feeding grounds of the Atlantic salmon are in the northern sector of the Ocean. The Eastern side of the Atlantic, which includes the Norwegian Sea and the Ocean east of Iceland is at present rather poor in terms of available prey species on which salmon and other pelagic species depend 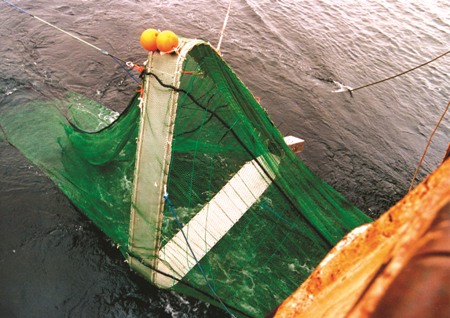 A Greenland government ( fisheries vessel near Ilulissat in June 2011 steaming through surface ice, interspersed with huge icebergs exiting the Jakobsvahn Glacier. Assessment of abundance of feeding Atlantic salmon and sampling are carried out from such ships. To give some idea of the scale of events in this part of the ocean click here.

If we accept that the Atlantic Salmon is a species of pelagic sea fish, we can adopt a new approach to managing stocks. With recent advances in knowledge of the marine phase of the salmon’s life history, and the increasing sophistication of scientific instruments and methods, especially in the field of genetics, we are now able to monitor salmon migrations at sea in considerable detail. 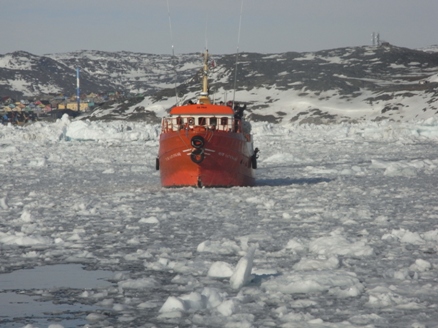 This photo is of the open cod-end trawl developed by Jens Christian Holst of IMR Bergen and Dr Richard Shelton, former AST Research Director, as the prototype sampling method for SALSEA-merge, which developed into the most ambitious marine-based project ever mounted to improve understanding of the lives of wild Atlantic salmon at sea. The role of AST in persuading NASCO to take on the fundraising and planning of Salsea was crucial to its success. Credit for this achievement should be given to Dr Shelton and Dr Holst.

Managing salmon at sea? There is still a degree of scepticism within the salmon fisheries management community about whether it is possible to obtain meaningful results from any attempt to conserve salmon at sea. The prevailing view within this group is that the best way to improve abundance is for river catchments to produce the maximum number possible of naturally generated smolts, and that there is little point in wasting precious resources on trying to manage salmon in the vast ocean.

AST’s view is that it is essential that all those involved in freshwater catchment and fisheries management continue to concentrate on improving riparian habitats, including the smallest tributaries, in order to maximise smolt production. It is also vitally important to address the causes of Atlantic salmon marine mortality. Recent advances in scientific instrumentation and methodologies, for example in tracking salmon, genetics, tagging and stable isotopes, provide data in unprecedented detail on Atlantic salmon in both the freshwater and marine stages of their lives. The implications for the fishery manager on the bank of a salmon river from an ecological approach to monitoring the lives of salmon at sea can lead to precise and real-time prediction leading to interventions to protect fragile populations within the overall stock of the river. If, for example, we know that the spring component of a river’s stock is below Conservation Level (CL) and we also know, from pelagic surveys and genetic analysis, that those fish are feeding in a sector of the ocean where prey species are in short supply, it may soon be possible to predict the quality and the abundance of the following year’s run of spring salmon, thus enabling the manager to reduce exploitation of that component of the river’s stock.

Advances in our understanding of the lives of wild Atlantic salmon at sea have profound implications for developing fisheries management from an aspect of rural husbandry into an effective and precise means of managing the fish in the context of its whole life, from an anadromous freshwater species to a member of the pelagic family of sea fish. 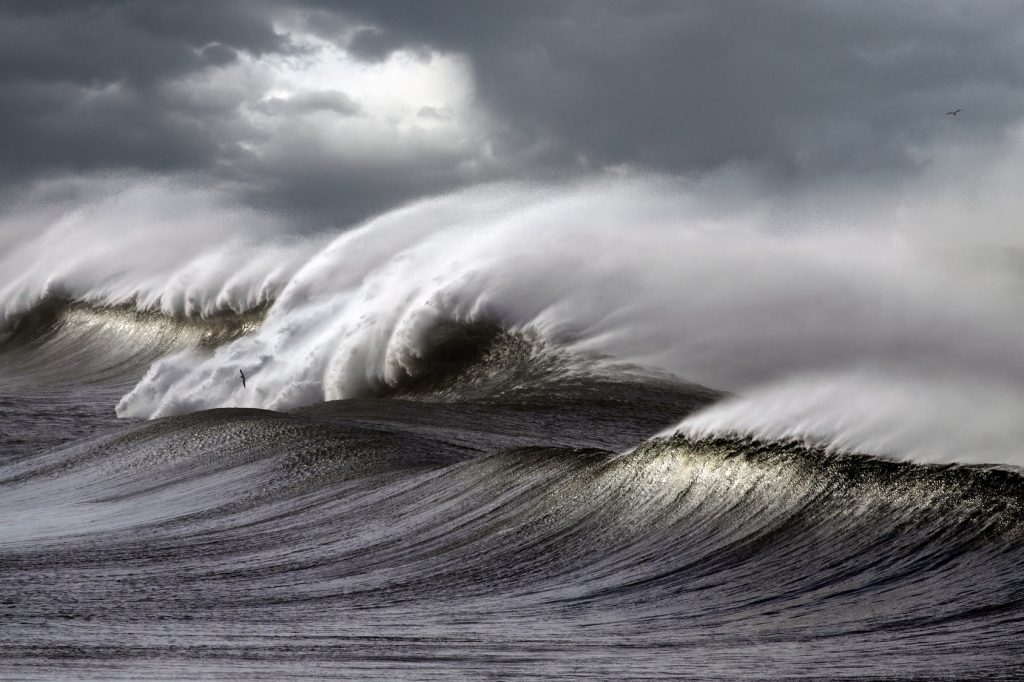 Severe storms like the one in the photo are predicted by climate change scientists and meteorologists to become more frequent. High winds, big waves and surface turbulence have a strong influence on currents and temperatures in the pelagic zone of the ocean. These changes disrupt the marine food web by impacting on the planktonic ecosystem and on pelagic species of fish. When studying the life of the Atlantic salmon at sea it is important to avoid a single-species approach. The salmon, as a member of the pelagic family of sea fishes, should be seen in the context of the physical changes taking place in the ocean and in its relationships with other species.