Since the launch of the Missing Salmon Project, lots of people have been wondering ‘Why start the project on the Moray Firth?’ as well as some other important questions which we have addressed here:

Q1 Is The Missing Salmon Project only focused on the marine environment?

The Missing Salmon Project is not designed to focus on one particular issue in isolation, but to build a comprehensive evidence based, holistic picture of all the problems affecting Atlantic salmon on their journey from the river headwaters to the ocean.

Without data and evidence it is impossible to influence policy, and very difficult to take effective action.

The Moray Firth Tracking will track the smolts from the headwaters of the rivers to the outer Moray Firth – over 100km.

Q2 Why haven’t you launched the tracking project on the West Coast to address fish farming?

We believe the evidence now exists to show that the growth of fish farming has, without doubt, had significant impact on wild salmon and sea trout, particularly in rivers on the west coast of Scotland. This year SAMS undertook a review for the Scottish Parliament titled ‘Review of Environmental Impact of Salmon Farming’ which can be viewed here: www.parliament.scot/S5_Environment/General%20Documents/20180125_SAMS_Review_of_Environmental_Impact_of_Salmon_Farming_-_Report.pdf

The Environment, Climate Change and Land Reform Committee concluded its inquiry and reported on the environmental impacts of salmon farming to the Rural Economy and Connectivity Committee Inquiry. Report here: www.parliament.scot/S5_Environment/Inquiries/20180305_GD_to_Rec_salmon_farming.pdf

A Rural Economy and Connectivity Committee Inquiry is currently running to assess the evidence. Organisations and the public can contribute their views to this inquiry until 27th April.

Q3 Why the Moray Firth?

The Moray Firth area encompasses a range of salmon river ‘types’ and offers an ideal opportunity to assess the mortality factors affecting almost 20% of the UKs salmon resource in one single location.

Some recent projects have found a higher than expected level of in-river smolt mortality – when the smolts are starting their migration. The Moray Firth tracking project will build on this small number of local acoustic projects. It will collect information on impacts such as predation and barriers to migration on a regional scale. As well as collecting information about the smolt migration in rivers it will also collect information about smolt migration and survival through the coastal nearshore.

Both the river and coastal information collected will be of interest to rivers in other areas. Never before have salmon been tracked on this scale in Europe.

Currently there is a great deal of interest in establishing marine renewable projects along the east coast of Scotland. This offers researchers an ideal opportunity to expand on planned environmental impact assessment projects in these areas to learn more about the factors influencing the survival of wild smolts in rivers estuaries and near shore areas. The Moray Firth tracking project offers a unique and time limited opportunity in this regard. 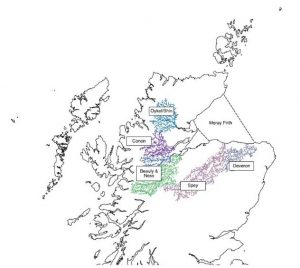 Q4 How does the Moray Firth tracking project fit into the Likely Suspects Framework?

Late last year AST and its partners organised a workshop of top Atlantic salmon and Pacific salmon scientists to advise on the construction and implementation of a Likely Suspects Framework. These scientists made a series of detailed recommendations relating to both freshwater and the marine domains, or zones, where smolts and adult salmon pass through on their journey to and from the ocean. Amongst their recommendations were:

The Moray Firth Tracking Project will focus on an area where up to 20% of the UK salmon stock has to pass on its journey to sea. A project of this scale is a good example of how we can collect ‘big number’ data. The information from the Moray Firth Tracking Project will be fed into the Likely Suspects Framework to give information on the number of fish making it through each of the domains within that region and identify where fish are being lost.

The Likely Suspects Framework has a track record of success. It was used by scientists to establish the key reasons for mortality in cod stocks in the Irish Sea as part of a study which led to vital management recommendations.

Q5 Is The Missing Salmon Project only focused on the Moray Firth?

Stocks of salmon across their range are showing signs of decline. There are many ‘suspects’ at all scales: local, regional, national and transnational. Only by gathering a comprehensive picture, using existing and new data, can we determine the true scale of each issue affecting their survival and target the priority areas to aid their recovery in a strategic way. Our aim is to undertake and support research that gathers evidence to inform policy and find practical, implementable management solutions to protect wild Atlantic salmon, and sea trout, in all areas.

Alongside the Moray Firth Tracking, we are involved in a project planned by a local rivers trust on the west coast to gather more information about how sea trout interact with their environment, in a loch with fish farming, using acoustic telemetry. As well as being valuable for the local river trust, this information will be used to inform the Likely Suspects Framework.

Q6 Why is The Missing Salmon Project important?

There has been a vast amount of research carried out over the years and most of this has been valuable to give us an improved understanding of mortality factors into migrating Salmon. What it has not done is pursue with determination the process of assigning a value to suspects and therefore prioritising their importance. It is only by using an evidence based approach we will win the arguments.

We all know the major suspects and we can all have an uninformed argument with different groups to suggest what is going wrong. What we have failed to do is collate evidence with a value and then assign it to a suspect. It is only in this way that we can challenge the organisations and issues which are impacting on the survival of this iconic fish.

So to all those out there who want to help with the survival of this fish help us collect the evidence and then let us work together to present the evidence so we can put in place policies to help the Atlantic salmon survive.

Q7 How can I support The Missing Salmon Project?

We are seeking funding support from a range of different sources. From crowdfunding to corporate sponsorship. If you believe that wild Atlantic salmon need help and that data is important in driving action, then please get behind our campaign.

Please share information from The Missing Salmon Project via your social media channels, ask questions and engage. And please make a donation, no matter how big or small. To do so visit:
https://www.crowdfunder.co.uk/themissingsalmonproject/

We are making the final touches to a booklet which will be circulated in electronic and printed format with more information about The Missing Salmon Project.

Matt Harris has been a fly-fishing photographer and journalist for well over twenty years. Matt has shot images and articles... More
Working in Partnership to save our salmon The Atlantic Salmon Trust is working in partnership with Grosvenor’s Reay Forest Estate... More
Joining forces & putting wild salmon first Wild Atlantic salmon are in crisis, with numbers drastically declining in recent years.... More

Congratulations to our Prize Draw Winner!