Analysis of the DNA of salmon and trout is a valuable technique that is helping to answer a number of fundamental questions about these fish. These include population structures, and the extent to which stocks of salmon and trout form genetically distinct populations; determining the sex of fish without killing them and distinguishing between farmed and stocked fish.

This work has been greatly assisted by three major EU funded projects that among other things, analysed sea trout population structures in the Irish and Celtic seas[1], the North Sea[2] and the Channel[3]

The project analysed the genetic profiles of trout population in six small streams in Cornwall, three of them coastal streams and three tributaries of the Fowey. The results were supplemented by samples from 20 populations from 13 rivers/streams, part of the genetic baseline produced for the EU-funded Atlantic Aquatic Resource Conservation project (AARC), which analysed resident trout populations in sea trout rivers across southern England.

The results demonstrated contrasting patterns of genetic structuring between a number of small coastal streams and larger catchments. The latter, such as the Fowey and associated rivers, tend to contain very closely related populations with higher levels of genetic diversity, the result of straying between streams within the catchments. Some of the small coastal streams, on the other hand, are genetically distinct and appear to be isolated from each other and the larger catchments; they are also characterised by low levels of genetic diversity.

There appear to be a number of reasons why these small coastal streams are so distinct. One of the main causes seems to be barriers to upstream migration. This isolation of fish above barriers has produced populations with highly distinctive genetic profiles. However, the low level of genetic diversity in these populations potentially reduces their ability to adapt to changing environmental conditions and substantially increases their risks of extinction.

Where there are no barriers to sea trout movement, small coastal streams have levels of diversity comparable to that found in large catchments. The Caerhays, for example, is a small stream to the west of Carrick Roads and is genetically similar to the neighbouring rivers flowing into the Fal estuary, fitting in with the patterns of genetic diversity and population structure in south Cornwall.

Overall, while the project identifies genetically distinct populations in a number of small coastal streams, it suggests that this is largely due to the impact of human activities, such as the erection of barriers and industrial activity; these also reduce the genetic diversity of the surviving population. This highlights the vulnerability of small stream populations and the need, wherever possible, to restore natural ecosystems and to remover barriers to movement and migration.

This is a two-year project, the overall objective of which is to establish the sex ratios of sea trout entering and leaving the river Tamar. This will contribute to the development of Biological Reference Points for sea trout and will improve our understanding of anadromy in trout. Specific objectives will be to establish the proportion of female fish within each age class, whether the sex ratio is consistent for different sea age classes, and whether the sex ratio changes with timing of river entry. The project uses genetic techniques to determine the sex of the fish. Smolts are caught for sampling in a screw trap on their downstream migration and returning Finnock (school peal) and adult sea trout are taken in a trap at the weir at Gunnislake, at the tidal limit of the Tamar.

In 2015, the first year of the project, results were obtained from 300 smolts, 197 finnock and 205 sea trout. These showed that 80% of smolts were female, falling to 70% for finnock and one-year-old sea trout. Nearly all the latter had spawned first as finnock. For sea trout that had spawned first as finnock and were two years old and more, the proportion of females fell to 45%, although the sample was relatively small (31 fish). Interestingly, for sea trout which spawned first after spending a winter at sea, including those that had spawned more than once, the percentage of females (67%), was close to that for finnock and one-year-old fish, although the sample here was even smaller (12 fish). It remains to be seen whether these results will be replicated in 2016.

This project sought to establish the contribution stocking has made to Shetland sea trout stocks. Burns in Shetland have been stocked over the past 10 years with trout of farmed origin, and sea trout catches have seen a significant improvement, from an annual average of around 10 fish in the 1990s to one of approximately 800 fish over the last 10 years. The project, therefore, sought to answer the two following questions:

Although some sample sizes were relatively small, the results were clear:

From the evidence from this project, it seems evident that stocking is having a very limited impact on sea trout numbers in Shetland.

Why does a ‘brown’ trout become a ‘sea’ trout?

The aim of this project, undertaken as a PhD, funded under the IBIS Interreg programme, was to examine the population structuring of brown trout (Salmo trutta) (referred to as trout hereafter) across the Foyle catchment, Ireland. The three main questions addressed were:

3) which tributaries of the River Faughan (Foyle catchment) produce the sea trout?.

On the second question: analysis of trout from 30 sampling sites across six sub-catchments of the Foyle showed three major genetic groups, with two genetic groups dividing the north and south of the Foyle catchment. Further, more detailed analysis revealed 19 genetically distinct populations with structuring evident between tributaries within sub-catchments and, on occasion, between sampling sites within tributaries (Figure 1). 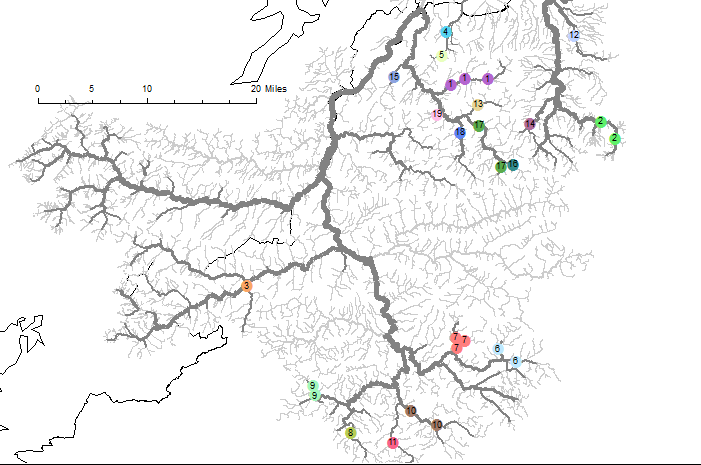 Figure 1: This map illustrates the complex population structuring of brown trout in the Foyle catchment based on 20 neutral microsatellite markers. Each coloured and numbered point on the map indicates a population.

The third question was designed to assist the Loughs Agency (the managing body for the Foyle catchment – http://www.loughs-agency.org/) develop a strategy for sea trout management and conservation. The River Foyle catchment was well known historically for its sea trout runs.  However, like elsewhere in Britain and Ireland the number of sea trout has declined dramatically over recent years.  To assist with the process of developing an index of sea trout rivers in the system a genetic-based survey was used to determine which tributaries are contributing to the production of sea trout. As proof of concept, the River Faughan, considered one of the best sea trout rivers on the Foyle system, was selected for a more detailed investigation. A rotary screw trap was placed at the mouth of the River Faughan to collect genetic samples from sea trout as they migrated to sea. A genetic baseline was then created by collecting genetic samples from juvenile trout taken from across the Faughan catchment Figure 1). The genetic samples from the sea trout were then compared with the genetic baseline to establish which rivers were contributing to the production of sea trout. The results showed that 88% of the smolts analysed on their downstream migration could be assigned to 5 of the 7 genetic groups found in the Faughan and its tributaries (of the two groups not detected, one is located above impassable falls). The majority of the remaining 12% assigned to rivers close to the Faughan, suggesting some straying between the Faughan and neighbouring rivers (Table1).

Table 1: The percentage of individuals assigned to each population.

The Laxford Sea Trout Tracking project is a collaborative project with West Sutherland Fisheries Trust, University of Glasgow, AST and... More
As part of the Acoustic Tracking Programme the AST provides support to other organisations conducting or wishing to conduct research... More
Aquaculture Useful Information / News: In May 2020, the Salmon Interactions Working Group (SIWG) published a report which made 42... More